Summer blighted by DO NOT SWIM notices: Portmarnock and Balbriggan hit 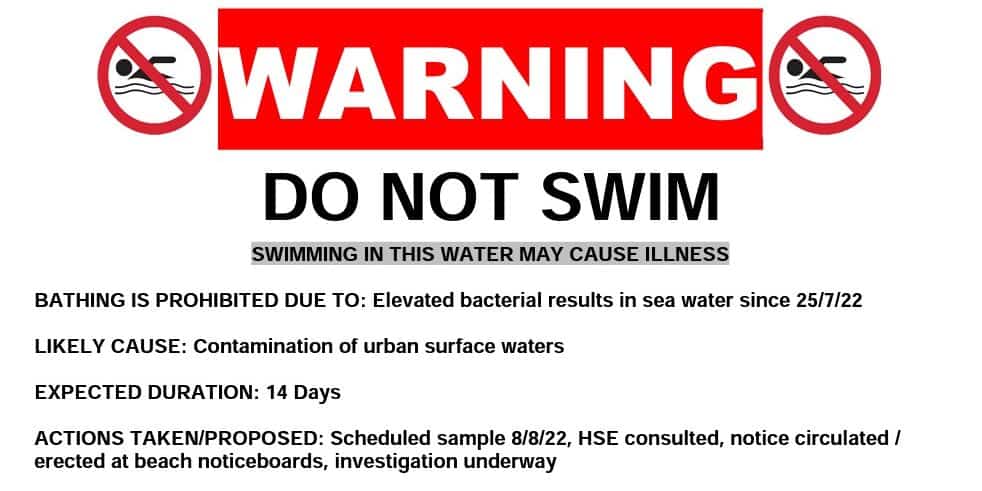 The notice on the North Strand in Balbriggan, which was first issued on July 25th, has now been extended after tests continued to find elevated levels of bacteria.

An investigation is currently underway, with the focus on the Bracken River where a private misconnection of foul water or a leak is suspected.

The beach is currently scheduled to reopen to bathers on the 18th of August, if test results allow.

“It is clear that water quality around Fingal is on a knife edge.

“It is especially bad that when bathers want to enjoy our coasts that we are finding elevated levels of bacteria on some of our key beaches.

“As a coastal county that wants to encourage tourists to our coasts we simply cannot tolerate this situation. We need serious investment in our water treatment and sewage especially in areas where we are seeing large increases in population such as Swords.

“Irish Water are playing whack-a-mole in Fingal, no sooner have they resolved problems in Rush and Loughshinny but they erupt in Balbriggan and Portmarnock. We need a step change in the level of investment in water to really get ahead of this problem.”