Lord Mayors pub to be demolished as new development revealed 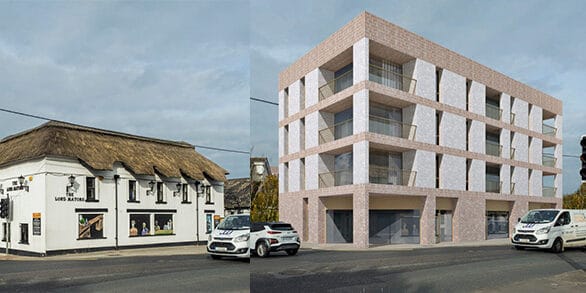 The landmark Lord Mayors pub will be demolished and replaced with an apartment block, as part of new plans for the site just published.

The Strategic Housing Development (SHD) proposed for the site will see 149 apartments in four blocks developed on the site, as well as retail units and space for a creche.

The proposal is the second attempt to bring forward an SHD on the site and the most obviously change is the increased access from Main St to the Ward River Valley park. A large accessible route goes through the development giving access to the park which will be developed as a regional park.

However the new proposal fails to protect the former Lord Mayors Pub despite considerable public outcry at the original plan to demolish it.

“I haven’t had a chance to dig into the detail of the application yet but I’m very disappointed at the decision to knock the Lord Mayors Pub.

“The old pub may not have been a listed building but it has been a Swords landmark for many decades and gives a link to the historical tavens that would have stood on or near the site going back centuries. The proposed apartment block, which will replace it, does absolutely nothing to retain any of the charm or character of the orignal. We have seen in the city centre numerous examples of the facades of historical buildings being incorporated into new ones. Given the fact that there will be shops or restaurants at ground level I do not see why this couldn’t be done here.

“If we allow decisions like this to be made all along Swords Main St we will strip any connection to the past and create an utterly bland and charmless town. We will be all the worse for it. We need to acknowledge our past and make sure our new buildings tell the story of where they are.

“Swords has a rich history worth telling and we have to be careful not to trample all over it.”

Here is an image of the plan for the area from above (click the link below the image to see the full PDF):

The site notice reads as follows:

(ii) construction of a residential development of 146 no. apartments (69 no. one-bedroom, 68 no. two-bedroom and 9 no. three-bedroom) in 4 no. blocks (ranging in height from four to six storeys over basement level) as follows:

– Block A containing 15 no. apartments (3 no. one bedroom, 9 no. two bedroom and 3 no. three-bedroom) and measuring four storeys in height;

– Block B containing 41 no. apartments (23 no. one bedroom, 17 no. two bedroom and 1 no. three bedroom) and measuring part-five part-six storeys in height;

– Block C containing 54 no. apartments (33 no. one bedroom, 16 no. two bedroom and 5 no. three bedroom) and measuring part-five part-six storeys in height; and,

– Block D containing 36 no. apartments (10. no one bedroom and 26 no. two bedroom) and measuring part-four part-five storeys in height.

(ii) all apartments will have direct access to an area of private amenity space, in the form of a terrace/balcony, and will have shared access to internal communal amenities including a gym (211sq.m), communal store rooms (158sq.m) and a cinema/playroom (89sq.m), 3,551sq.m of external communal amenity space and 2,041sq.m of public open space; (iii) provision of 109 no. vehicular parking spaces (including 5 no. mobility parking spaces, 5 no. car-share spaces and 11 no. electric charging spaces), 6 no. set-down parking spaces and 332 no. bicycle parking spaces at basement level accessible via new vehicular access from Church Road; (iv) provision of 5 no. commercial units (746sq.m total) located at basement/ground floor level in Blocks A and B; and 1 no. childcare facility (424sq.m) located within the basement level of Block C; (v) removal of existing culverts, installation of new culverts to facilitate pedestrian/vehicular access and diversion of the Glebe Stream on site; and, (vi) all ancillary works including public realm/footpath improvements, landscaping, boundary treatments, internal footpaths, provision of surface level bicycle parking (56 no. spaces), bin storage, foul and surface water drainage, green roofs, ESB substation and all site services, site infrastructure and associated site development works necessary to facilitate the development. A Natura impact statement has been prepared in respect of the proposed development.