Lights at Brackenstown Rd subsidence to be in place until MAY 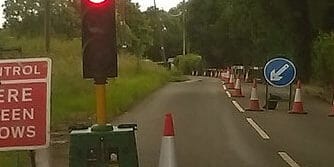 The temporary traffic lights on the Brackenstown Rd between Swords Manor and Knocksedan are likely to be in place until May 2023, engineers have confirmed.

Speaking on a motion brought by Cllr Ian Carey to the Area Committee, Fingal Council engineers confirmed that the foundations Brackenstown Road at that point are based on clay this is the cause of the subsidence.

They also confirmed that two stages of works are necessary to resolve the subsidence. The first phase involves stabilising the area around the subsidence and phase two involves resetting the foundations of the road.

The tender for phase one will be published before Christmas with the works awarded in the new year and phase 2 after they are completed. Based on their best estimates the works will be completed in May 2023.

Officials also explained that an extended audit of the road along that stretch will be carried out after the remediation works. This points to the possibility of further disruption along that route.

“At least now we are receiving some clarity around what is happening on the Brackenstown Road but the timeline they have given won’t please anyone.

“It’s an essential route into and out of Swords and the delays the temporary lights have brought has caused serious disruption to residents. I hope now we don’t see any slip in the timelines. This route will likely form part of the Western Distributor Route around Swords and it will need to expand to provide walking and cycling routes so a solid foundation is essential.”